Box, digital photograph
Art plugs us into an upside-down realm. This “art realm” helps us understand reality from a perspective that brings the shadows of culture to life. In other words art has the ability to re-image life in a way that reveals thoughts that would otherwise be hidden and suppressed due to societal conventions. One particular art movement that became rather successful at this was Surrealism which started in the 1920s. Informed by the psychoanalysis of Sigmund Freud the surrealists aimed to unlock the doors of the subconscious. To gain access into the hidden chambers of the brain the surrealists’ paid close attention to dreams and also made up intuitive games and exercises. One of Salvador Dali’s strategies was to lie-down with a spoon in his hand with pencil and paper close by. The moment Dali started to fall asleep the spoon would slip out of his hand and hit a saucer. Startled by the spoons impact he would immediately grab the pencil and record the first random thing that popped into his head. By juxtaposing random assortments of objects, images and text the surrealists revealed entrenched primordial human traits. For instance, a famous sculpture by artist Man Ray comprised of a household iron which he welded on one inch spikes to its smooth surface. This alteration transformed a domestic tool used to smooth out clothing into a torturous device - an artistic act that draws to mind underlying tension or latent sadistic desires within the home. Therefore, the surrealists’ bizarre creations made apparent very common human emotions, desires or thoughts that moral society would deem sordid and debased.

Maree Horner a Taranki based artist has devoted her practice to investigating how the random assortment of imagery can reveal such latent understanding about human habitation and relationships. Horner has exhibited throughout and has been collected by the . Having studied at art school in during the 70s Horner was involved in the early development of conceptual and post-object art in . She became known her sculptural works that demonstrated a sensitivity of material and form. These works included precarious glass constructions, rubber tyre experiments, ice monoliths, sand forms and one work consisting of an electrified domestic arm chair. Since the mid 90s Horner has focused almost entirely on drawing, painting, printmaking and digital photography. The inquiry of Horner’s practice is somewhat similar to the surrealists’ investigation of juxtaposition and psychoanalysis. However, her work doesn’t share the wild imagination or maddening delusion of early surrealism - rather Horner’s imagery is cunningly unobtrusive, persistently repetitive and more enigmatic. 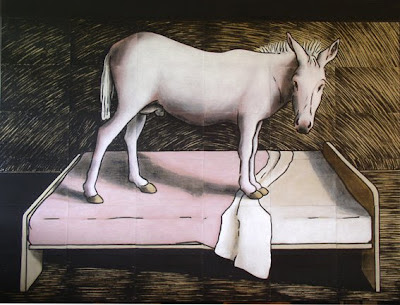 Often working at a large scale and reduced palette of pink, black and white Horner’s mixed media works present us with familiar but uncanny imagery. The imagery depicts a lexicon of objects ranging from humble domestic items such as sofas, baths, dressing tables, jugs, paper bags and cardboard boxes juxtaposed with grand architectural forms like pyramidal columns and in her latter works a illustrative style donkey. Horner repetitiously rearranges this array of imagery in each work by pairing up different objects. Each new composition creates an absurd surreal situation. Rather than diminish the symbolic power of each item the repetition makes us consider the possible meanings of the pictured objects even more – to the point were we are less concerned with what each object is and more interested in the relationship suggested between their contrasting forms. Successively we become aware of a female and male narrative as grand pyramidal columns are reduced in scale and pictured inside paper bags or a donkey trodding on a bed – odd sexual innuendos that draw attention to the social conditioning of gender relationships and suppressed sexuality.

In a new body of work entitled Furniture of the World Horner has further developed her visual language but this time using digital photography. These works depict domestic furniture and objects containing pounds of flesh. On closer inspection you notice that each fleshy lump has a belly button. Considering the belly button being the umbilical cords port and source of foetal nourishment – together with the receptacle nature of these domestic containers – suggest complicated but very instinctual meanings. The domestic containers could indicate the influence our lived environment and family structure in which we develop as a secondary womb – a place were we learn about how to behave and belong. However, there is a touch of horror to these works bringing to mind news stories of troubling psychopathic killers – usually in the - that mutilate the innocent and hiding the dissected corpses in fridges or boxes - playing out their sick fanaticises. Therefore, these works sit on a tenuous line being both comfortably homely or horrifically debauched - a betwixt and elusive conclusion that reveals more about the animal within us and how little we understand our suppressed psyche.

For more information and images of Maree Horner’s work visit her website: www.mareehorner.co.nz

This is Bruce’s last article as he is leaving New Plymouth to curate an exhibition in .